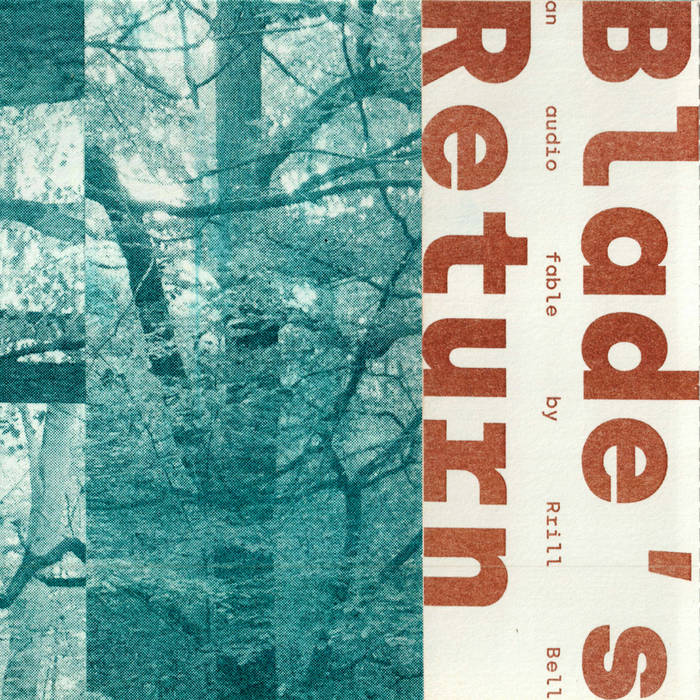 The trek in is a ravine fever dream
of dilated time and lurking flashbacks...

And here at last was the clearing,
resplendent in the dusk, sweet darkness falling.
All night Blade sat and sang, he wailed, his voice doubled, tripled.
He rosined his bow with the sap of the vanquished,
and asked that his wrongs might be righted.

And lo
as the witching hour approached
the forest folk, assorted flora,
emerged to warmly greet him,
then whispering, withdrawing,
they held council.
Soon the flickering drone of forgiveness
filled the hazy glade.

Past transgressions laid to rest,
a twitching, pulsing grew in presence,
till all around erupted
into joyful, mossy-padded raving.

Rrill Bell's latest album, Blade's Return, the inaugural release on Berlin's new Klappkart label, is an audio fable, a radiophonic narrative work relating the inner and outer reality of the handsaw Blade as he undertakes a journey back to the forest where he renounced cutting, to sing a song of regret and seek redemption. At the heart of the piece, which expands on the artist's unique personal approach to the cassette tape as a highly malleable medium for sound production and deepens his previous practice of "augmented reality" and embedded location recording, is an in-situ exploration of the "singing" saw as an expressive sound source for experimental music.

Blade's Return was conceived and primarily recorded during a two-week residency (sponsored by the SHAPE platform for emerging artists) in the woods of Saxon Switzerland, on the Czech/German border, in the summer of 2020.

Musically, the hybrid piece plays with a range of inspirations and associations, from the lo-fi guitar-to-cassette-four-track music of Ash Bowie and Emil Amos to Rolf Julius' outdoor interventions and beyond. Unabashedly "cinema for the ears", Blade's Return is equally inspired by the worlds of film and animation, from the classic Czech cartoon series Krtek (The Mole) to the psychedelic quest films and new westerns of the 1960s and '70s to works like Fischli & Weiss' Der Rechte Weg.

Born and raised in the US-American Rust Belt, and a resident of Germany for over two decades, Rrill Bell draws on the formative inspirations of radical scratch culture, Cagean thought, harmolodics, musique concréte, and various other strains of experimental music practice. Over the past decade, his work has also expanded to include various hybrid approaches to location recording, augmented reality, composition and audio narrative.

Klappkart is a new Berlin-based label initiated by sound artist Peter Strickmann. The label intends to release digital audio works from artists of various fields who share an exploratory approach to listening, soundmaking and storytelling. Each digital release is published in combination with a poster/booklet print edition. Klappkart #1, Blade's Return, is available as a beautiful two-color riso-print booklet featuring narrative texts from the piece and accompanied by a download code, or as a stand-alone digital download from the label's Bandcamp site.

Rrill Bell's work has previously been released by the Elevator Bath, Gertrude Tapes, Weird Forest and Denovali labels, among others.

Primarily recorded in the woods of Saxon Switzerland in the summer of 2020.

The very ending of part one (The Return), includes a sampled, re-amped fragment of a concert recording from May 2007, featuring Rrill Bell and Martin Juhls on electronics along with Serge Corteyn (guitar) and Oliver Siegel (accordeon).

Part four (Release) features excerpts from an informal outdoor sound improvisation by the participants of the 2020 Outsideininsideoutinsideoutoutsidein Lab residency.

A previous, edited version of this piece was commissioned and broadcast by musikprotokoll festival / ORF, in the scope of the SHAPE platform for emerging artists.

With warm thanks to Dagny, Peter, Aloïs, Alesya and all the participants of Outsideininsideoutinsideoutoutsidein 2020.

Rrill Bell ////// aka The Preterite recommends:

Bandcamp Daily  your guide to the world of Bandcamp